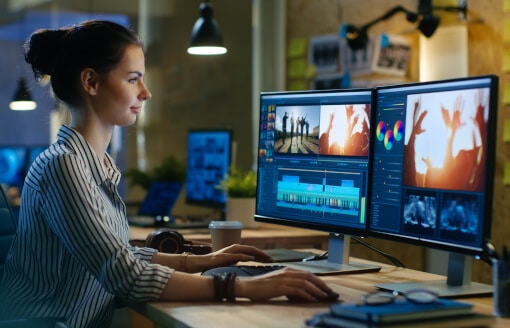 If you want to edit or mix audio for a video production, step 1 is exporting the audio from your video editing software so you can import it into your DAW (audio editing software). There are a few ways to do this. Which one you choose mainly depends on how many audio tracks you have in your session.

Only a few audio tracks?
If you only have 1 or 2 audio tracks (e.g. just a voice-over and music) it is often easiest to export them one by one as separate audio files. Make a selection that’s exactly the same length as the video. Put the track you want to export in ‘solo’, and export it. This is often done via File – Export (depending on your video editing software). Do this one by one for all audio tracks.

Don’t know what settings to use when exporting the audio? See Audio formats – Which one should I use. You then import the exported audio files into the audio editor. Put them both on their own audio track, import the video track into your DAW and you can start mixing. Most audio editors can handle a small MP4 with H264 codec by the way.

More audio tracks?
If you have many audio tracks, there is an easier option to export everything at once: as an OMF (Open Media Framework). This is a format in which all separate audio tracks are exported into one large file. That file can be opened in almost all DAW’s. And when imported, you will see all the separate audio tracks back. On the right place in the timeline, exactly where you had put them during video editing.

Let’s have a look at creating an OMF file.

How you create an OMF depends on the software you use. In Adobe Premiere you can do it via File – Export – OMF. When exporting you will come across a number of options. Below we will discuss the options you will find in Premiere. This is similar to the options you see in most other video editing software.

Besides an OMF (or separate audio files), you also want to export a reference video, so you can import it into the audio editor. Most DAW’s can handle a small MP4 with H264 codec. Keep it small so the DAW doesn’t have to waste all it’s resources on the video.

Importing OMF files into your DAW

How do you import an OMF into your DAW? That differs per DAW, but most of the time it’s not very difficult. In Pro Tools for example, you first create a session. Then you go to File – Import Session Data and select your OMF file. Other DAW’s have similar ways of importing OMF files, start looking at File- Import.

Usually there are many options you can choose from when importing an OMF file, see the screen below. This is the import window you see when importing OMF files into Pro Tools. But don’t get intimidated: Most of the times you can leave all the settings as they are and simply click ‘OK’. 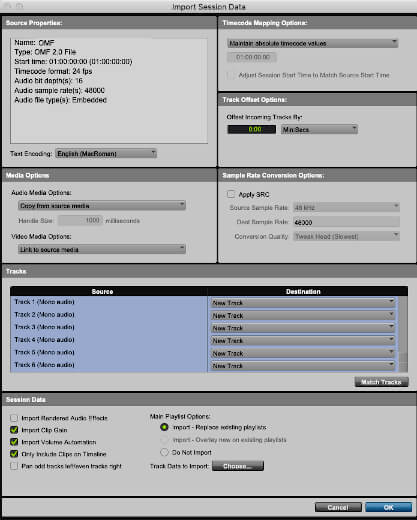 That’s it, do you have any questions or comments? Please send an email to gijs@audiokickstart.com.