Mixing Audio for Video – compressors and limiters in practice

Ok, we’ve perfected the voice recordings freqency-wise. Now let’s look at the dynamics. This is done with a compressor or limiter. Not familiar with those yet? Check the tutorial ‘Compressors and limiters explained’. Below we will look at compressing and limiting voice recordings.

One of the questions I get a lot: what do you do first with a voice-over or dialog tracks….EQ-ing or compressing?

Well, it doesn’t matter. It depends on the particular situation. If there is a lot of sub bass in a recording that you want to filter out, it’s good to do this first and then compress. Otherwise the compressor will react to that unnecessary sub bass. If you want to ‘color’ the sound with an EQ, then it often works well to first compress and then EQ. Sometimes the compressor ‘messes’ a bit with the high frequencies, they become less clear. So in that case it makes more sense to place the EQ after the compressor. In short: just listen to what works best! 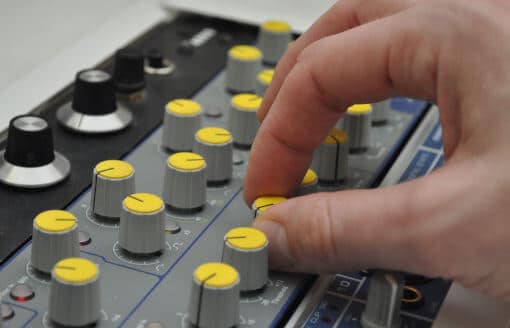 So how to compress? Below you will find a good starting setting of a compressor for an average voice-over recording. As there is no such thing as an ‘average voice-over’ in real life, use it as a starting point only! 🙂

– Set the attack between 5-10 milliseconds and the release between 50-60 milliseconds as a starting point. But I have to be honest: I never really look at the settings of the attack and release. I put them both a bit in the middle as a starting point, and then I just turn them until it sounds good. So I personally find giving good starting values for attack and realease a bit hard to do.

– Now determine when the compressor starts working with the threshold control. First set it all the way to 0dB (no compression) and then play the voice-over.

– Slowly pull the theshold level down until the compressor starts working. This can often be seen on a gain reduction meter. Now it’s a matter of listening what sounds good. If you pull the threshold down too far, you hear that the compressor has to work hard and everything gets dull and lifeless. If you don’t use enough compression, you hear big differences in volume and it will not sound as ‘fat’ as you would like it to sound.

– Now try different attack and release settings. Setting the attack too fast will probably sound a bit too ‘aggressive’, everything is immediately compressed which can sound unnatural. Too slow causes the compressor to barely do its job. The wrong release setting sometimes gives a ‘pumping’ sound (the last part of a word is suddenly made louder by the compressor). Try to get an ‘even’ sound with the attack and release times.

– Then focus on the ratio. With very dynamic audio you might use a higher ratio (3:1 or more), sometimes very subtle compression is enough (1,5:1 or 2:1). For example if you don’t really need compression, but are looking for a certain coloration of the sound. In the tutorial ‘Picking the right compressor’ you can read how a couple of very well known compressors (plugins) color the sound and what compressor you should pick to get a certain sound.

– So, now we’re almost there. Because the compressor is now working and attenuates all loud peaks in the recording, the total volume also sounds softer. Use the Make-Up Gain button to turn up the total volume.

Limiting
Let’s quickly discuss limiting. I actually never use a limiter on a voice-over. A limiter is a compressor with a ratio of 12:1 or higher (see ‘Compressors and limiters explained’.) For a voice-over this is never really necessary is my experience. It can work sometimes to color the sound in a specific way, but I usually only use limiting during mastering.