What is the best audioformat? Wav? MP3? AAC?

You can easily get lost in the jungle of audio formats. Every audio format has it’s pros and cons. What format you choose mainly depends on what you want to do with the audio: recording podcasts or voice-overs, recording/mixing music, or maybe all you want is to put as many tracks as possible on your iPhone. Time for some clarification! 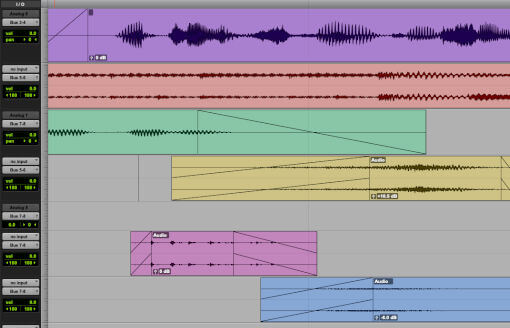 16 bit, 24 bit?
The bits define the the dynamic range. This is the difference between the loudest and the softest sound you can record. More bits mean a larger the dynamic range. So when recording audio, I would always suggest to go for 24 bit instead of 16 bit. It gives you more headroom and you can record a hotter signal which means you’ll hear less of the self-noise generated by the recording device.

44.1, 48 or 96 kHz?
This is the ‘sample frequency’. Think of old-fashioned film. This consisted of a lot of pictures, taken at regular intervals (for example 24 times a second). If you watched at all these pictures in quick succession, the image seemed to move. With digital audio, a ‘picture’ of the sound wave is taken at regular intervals. If you play those back one after the other, you hear the whole sound wave again. We need a little more than 24 pictures a second though. At 44.1 kHz a picture is taken 44100 times per second. At 48 kHz 48000 times, etc.

Good to know: The higher the sample frequency, the better the high frequencies can be reproduced. For broadcast (radio and TV) and often also online video, 48 kHz is used a lot. For music there isn’t a real standard. But both 48kHz and 44.1kHz sound great! Whatever you choose, always make sure that all audio has the same sampling frequency within one project. Otherwise the audio will play back too slow or too fast, resulting in a slightly higher or lower pitch and speed.

kBps and data reduction
Audio formats that use data reduction (we will come back to this) can have different settings regarding the kBps, Kilobit Per Second. This is the bit rate. It is actually a way of indicating how many bits are processed per second. This is useful to take into account when streaming, for example. The more bits you have to process per second, the more difficult it is for the internet connection. So the fewer kBps, the better in that respect. But unfortunately, this is at the expense of sound quality. To get the bit rate down, there is a way to make the audio file smaller. Simply by removing sound information from the audio (= data reduction) that is said to be be virtually inaudible to the human ear. But then, if you throw away too many bits, you will hear it at some point anyway. At the bottom of this page you can find an example of an MP3 file where a lot of data reduction has been applied. You can immediately hear all kinds of side effects in the audio.
Formats that use data reduction are a.o. MP3 and AAC (we will come back to this below). When converting to such an audio file, you can choose the bit rate. From 320 kBps upwards it is almost inaudible that any data reduction has been applied at all. But this makes the file size bigger and harder to stream. For speech (e.g. a podcast) 64 kBps is sometimes acceptable, but I would recommend 128 kBps. For music, it is better to go a bit higher; from 256 kBps it is usually acceptable and from 320 kBps the data reduction is inaudible in many cases.

Different formats
Just like you can save a text file as .docx but also as .txt, you can also save audio in different formats. Below are the four most common formats.