Mixing audio for video – Zooming out: the right balance

When the voice-over is edited and sounds good, the music has been cut to size and the sound effects have been added, it’s time to look at the bigger picture.

At this stage, it’s very important to keep in mind that our brain can only process 1 thing at a time. It can switch between stimuli quickly, but it will only pick up one thing at once. So if the video has a title on screen, the voice-over says something different at that point and you also want the viewer to hear sound effects and music, then some of those things will probably pass by the viewer and it won’t stick.

So the most important thing is to find the right balance. You want to re-enforce the video with audio. Make sure the audio makes the viewing experience better. This can be done in all kinds of ways. Let’s have a look! 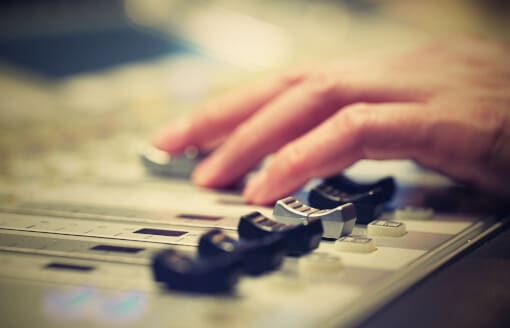 Placement
Don’t be afraid to cut the voice-over up in small parts and add silences or remove them. If you’ve managed to cut the music exactly the way you want it, you’ll probably have a clear break in the music between the problem and the solution phase of a video, for example. Make sure the voice-over has finished describing the problem just before that break. This way all your attention can go to hearing that break in the music. And knowing the next ‘chapter’ in the video is about to start.

Sound effects can also be used to the same effect. If there is something on the screen that is very important – for example a title that the viewer must read – you can add a sound (like a ‘whoosh’ sound) and mix that in a little louder. Also subtly soften the music and make sure the voice-over doesn’t say anything at that point. That way there is no way anyone will miss the title. And this way you control the focus of the viewer with sound.

Mixing: 3D
By correctly placing all the ingredients in the mix, you make sure that the viewer’s focus is continuously where you want it to be. But there’s something else that’s important and that we’ve paid attention to before: Giving everything its own ‘place’ in the mix. It really helps your mix if some things sound very up-front, and other things sound as if they are a little farther away. The trick with the voice-over and the music we came across earlier (amplify 3-6kHz in the voice-over and attenuate that same frequency range a bit in the music) is one of those things you can do to make sure everything has its own place.

The voice-over is close to you, the music is just behind it. With sound effects, it’s up to you to choose where you want to place them. It depends entirely on the video at that point. If you put a sound effect on something in the video that is clearly far a way, obviously it makes sense to make it sound a little farther away.

So, how do you do that? Here are a few tools to experiment with. 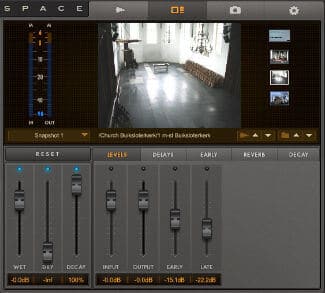 Use level:
The absolute number 1 for our brain when it comes to determining the distance of a sound: How loud is it? Ok, just cranking up the level of the voice-over won’t make it sound closer. It will only ruin the balance of you mix. But with sound effects it can be different. For example, when someone is walking in the video and he/she is close to you, you expect to hear her footsteps quite loud. With someone who walks somewhere very far away, maybe you don’t expect to hear her footsteps at all.

Use an EQ:
High frequencies can’t travel far. That’s because they have very short wavelengths that die out quite quickly. So: When something is a little farther away from you, you don’t hear so many high frequencies. This knowledge can also be used when mixing. When a car is passing somewhere in the distance, cut some of the high frequencies and turn down the level a bit.

Use reverberation:
If someone shouts something at you from far away, you often hear some reflections and echoes. With reverb and delay plugins you can mimic this effect. How you do it, depends on the specific environment you want to mimic: There won’t be that many reflections outside, so a short reverb might be most realistic. In a large factory building, you expect to hear much more reverb.

Another example where you use reverb to make things sound closer or farther away, is to adjust the pre-delay. We already talked about this in the part about Reverb.

Always use a combination of the above: Just turning up the volume of something in the mix doesn’t make it sound closer. Combine it with an EQ and/or reverb like we discussed here and you will get that ‘3D’ effect. Always try to listen in 3D. You could talk about ‘more treble’ or ‘less treble’ in a recording. But you can also talk about ‘closer’ or ‘farther away’. This way you no longer use an equalizer as a technical tone control device, but as a placement tool in the 3D image.