It was always like a contest. Who could make their TV commercial sound the loudest? Because when you hear something that’s just a little louder, it sounds just a little better to the ear. At least for the first few seconds.

For years this contest annoyed viewers, because commercial breaks sounded a lot louder than the TV shows you were watching.

So how could that be? Were there no rules how loud the audio should be? Yes, there were rules. The audio couldn’t be louder than a specific value (-9dBFS here in The Netherlands to be exact). But you could fool the system and make it seem like it sounded much louder. With a brick-wall limiter, for example. If you take all the peaks out of the mix, you can make it a lot louder while it stays nicely under the -9dBFS. It sounds a lot flatter and if you exaggerate it, the sound doesn’t get any better. But it does get louder, and that’s what it was all about… The image below shows a heavily limited waveform (right) and the original waveform (left). All dynamics are gone.

You can also boost the frequencies a bit where our hearing is more sensitive (mid and high) to make it seem louder. Or use a compressor and a limiter, to flatten things out even more. Or subtly clip the audio, which makes it sound even louder. As long as it had an output level of -9dBFS, all was fine.

It may sound crazy to work like that, but this is really what happened for years. Not only on TV, but also in the music industry this competition to be ‘the loudest’ was going on. The ‘Loudness War’ it is called. And fortunately for the most part it’s over.

Mainly because we now have smarter methods to determine how loud something sounds. The EBU R-128 meter mimics the human ear, so when it sounds louder to the human ear, this meter will show a higher value. 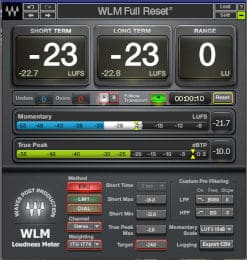 With EBU-R128 a few new terms have been introduced. Loudness Units for example (LU’s). 1 LU equals 1dB. LUFS is the same, but relative to Full Scale. To learn more about Full Scale, check out the part about  Decibels in our tutorial ‘Practical(!) audio theory’.

Another new term is ‘dBTP’. TP stands for True Peak, a new way to measure when audio clips.

I am going to simplify things here, but the important thing to remember is that the meter should read -23 LUFS and the loudest peak should stay below -1dBTP. In Europe that is, in other parts of the world, like Japan and the US other (but similar) standards are used.

In practice
So how do you get your mix ‘TV ready’? Well first of all, make a great mix. Don’t be bothered by how loud it sounds. Just master it so it sounds the way you want it to sound. Have a look at our tutorial ‘Mastering audio for video productions’ to learn more about that.

Then you need a EBU R128 meter. There are all kinds of meter plugins on the market, for example the Waves WLM (image above), Grimm Audio Levelview and the free Youlean Loudness Meter plugin. In the video above this meter is used. Below we use another popular EBU R128 meter: The Waves WLM Plus. This plugin also has a nice feature to automate the leveling process.

Now the goal is to get an integrated level of -23 LUFS and the loudest peak should stay below -1dBTP.
As said, we use the Waves WLM meter as an example here. On this plugin you have to select the EBU R128 preset first (click on ‘load’ on the right top of the plugin screen). You can choose between EBU R128 LUFS18 or LUFS9. For our purposes it doesn’t matter which one you pick.

The WLM Plus plugin makes it even easier with its ‘trim’ button. Press it after playing back the audio once and it will automatically adjust the volume to -23LUFS. Hit ‘reset’ on the plugin and play the audio back one more time to check this. It also has a True Peak limiter, turn it on and it helps you to stay below -1dBTP.

Render your audio to a 24bit, 48 kHz wav (this can vary a little between TV stations, always check the delivery specs for this!) and use this audio for your TV commercial. And that’s it!